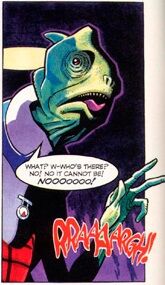 Simon A. Forward
The Galyari are a sapient spacefaring species which have colonized numerous planets in the past. The name "Galyar" has been applied to numerous of these worlds, so their actual home planet cannot be pinpointed.

One of such planets was the homeworld of the sapient Kooskaru species, which the Galyari sought to exterminate, considering them as pests. This was prevented by the Doctor in his sixth incarnation, as he managed to banish the Galyari from that world. As a result, the Doctor (a.k.a. "the Sandman" to them) became known as a legendary evil figure dreaded by the Galyari race.

The Galyari appear lizard-like on the outside, but are actually descendant from bird-like ancestors. However, they do shed their skin periodically, much like a snake. They're known for their extremely acute sight and their independently-moving eyes, similar to those of a chameleon. Their sight is so sensitive, that some combinations of bright colors are actually harmful to them. Staring at the Sixth Doctor's coat, for instance, causes them literal pain and discomfort.

An interesting aspect of the Galyari psyche is their love of birds, which the Doctor believes represents a fascination they have for their own evolutionary history. It's also known that in ancient times they possessed the ability to alter their skin color as a form of camouflage. Modern Galyari no longer possess this ability, however.

They're able to store racial memories and knowledge in an organic matrix called the shushkubra, or memory eggs, which are grown from discarded Galyari skins.

As of the 27th century, the Galyari have become nomads, endlessly traveling through space in a structure called the Clutch, which is made of numerous interconnected ships from different species traveling together like a swarm.

Retrieved from "https://aliens.fandom.com/wiki/Galyari?oldid=103180"
Community content is available under CC-BY-SA unless otherwise noted.