Ben 10
Galvans are an extraterrestrial species of bipedal frog-like beings from the planet Galvan Prime.

The Galvan are small frog-like bipedal creatures standing between four to six inches (~ 10 to 15.24 cm) with sharp teeth and grey skin. Normal Galvan have green or orange eyes and Galvan from Dimension 23 have blue eyes, whereas Albedo and Dark Matter have red eyes.

Infant Galvan look like tadpoles in the sense that they have tails and lack legs, but grow legs and shed their tails at a time they call "wisdom feet".[1]

The Galvan's natural predator is the functionally extinct Omnivoracious.

Galvan have an immense lifespan of thousands of years.[2] This is exemplified when Azmuth, a Galvan of considerable age, says he expects to "only" live another 3,000 years.

Known for evasion rather than confrontation and lacking any actual combat prowess, Galvans have developed intellectual capacities far beyond those of neighboring species. Galvan are the creators of much of the great technology around the universe, as well as other worlds and species.

Even if faced with something unfamiliar to them, Galvan can learn it very quickly. After all, their intelligence extends beyond technology and biology.[1]

With the microscopic pads that cover their bodies,[3] their slimy skin allows Galvan to stick to almost any surface. They also have soft flexible bones that allow them to squeeze into tight spaces or spring quickly from danger.

Galvan can breath underwater because they possess gills, making them amphibious.[1]

The energies generated by a Galvan's mind lead to an acceleration of synaptic activity.[4]

Despite their small size, Galvan are durable enough to withstand being throw against a wall. For Omni-Enhanced Galvan, their natural durability is increased thanks to their rock-like armor.

Galvan are strong enough to carry Human-sized objects with their hands.

Due to the alterations Kevin Levin has made to the Antitrix, Dark Matter is more powerful (and most likely smarter) than ordinary Galvan. Unlike ordinary Galvan, he can shoot dark red fireballs from his hands that encase enemies in a similarly-colored crystal and secrete a dark red cerebrospinal fluid[4] that he can manipulate to form crystal weapons.

Omni-Enhanced Galvan are larger in size and better suited for combat. Their non-solid limbs can stretch, bend, and administer electric shocks on contact.

Galvan must remain ever vigilant because size still matters in a dangerous galaxy, meaning they do not match physically with most species, including Humans and Chimera Sui Generi. As such, Galvan can easily injure themselves.

Similarly, a Galvan's small size can make them vulnerable to strong winds such as that generated by Trombipulor's Species.

Because of their sticky skin, it is equally difficult to grab a hold of Galvan.

Galvan appear to be vulnerable to fire.

Despite possessing immense intelligence, Galvan can still make miscalculations. If their primary brains are to be removed, they can become stupider than usual.

If Dark Matter's cerebrospinal fluid is forcibly extracted from him, it will both cause great pain and incapacitate him. In addition, there is a limited extent to how much damage his crystal traps and weapons can take before cracking or shattering.

Galvan are the smartest species in the Milky Way Galaxy,[1] and the universe's best engineers, technicians, and researchers.

The Galvan's intellect is apparently highly revered, as the Highbreed Supreme referred to Azmuth as a slightly advanced form of "pond scum". Amusingly, all Cerebrocrustaceans except Dr. Psychobos do not consider the Galvan to be their primary rivals.[1]

Nothing can quench either a Galvan's thirst for knowledge or their hunt to catalog all interstellar DNA.

As incessant collectors of technology, Galvan can enter and operate virtually any machine, even if they have never seen it before.[5]

There are some Galvan that live outside the cities of Galvan Prime that have less tech-focused lives.[1]

The Galvan admire the Planchaküles' industriousness and skill, but prefer not to hang out with them too much after work.[1]

Despite appearances, Atomix's Species does not have any connections with the Galvan.[1]

Galvan technology is very eco-friendly and works in harmony with nature. Even their domiciles are a grown techno-organic fungus.[1]

Known inventions of the the Galvan include the Potis Altiare, anti-gravity projectors used by Polymorphs, the Null Void and its native Null Guardians, Rook Blonko's Proto-Tool, universal translators, and a rebuilt version of their own planet (dubbed Galvan MK 2).

Azmuth has created the Omnitrix technology, the Galvanic Mechamorphs, Primus and the Codon Stream, the Volaticus biopsis, the Skeuomorph, and the Ascalon.

Primitive Galvan used to worship technology gods, such as the one that Azmuth's bio-suit (from when he first met Ben Tennyson and Tetrax) was based on.[3]

Galvan are very loyal to keeping their top research and technology a secret from other species, as they would rather die than just give it up unless there is a good reason for it. This is demonstrated with the need for the Potis Altiare to help Ben defeat a To'kustar known as "Evil Way Big".

Once regarded as pets, their owners eventually realized the Galvans had enhanced intelligence. From there, things rapidly changed.

The Galvan built an armada of sentient drones that probed the cosmos, searching for alien civilizations, scientific anomalies, and singularities that only advanced Galvan minds could comprehend.

With the immense amount of DNA information they collected from the universe, the Galvan uploaded them into Galvan Prime's central computer, ensuring that Galvan Prime would forever remain the center of research to the DNA of the universe.

Galvan have visited Earth countless times over the course of millennia. According to Azmuth's father, the Galvan built Stonehenge as a practical joke.

During ancient Egyptian times, two Galvan assisted Humans and Tetramands with the construction of the pyramids until their bumbling caused them to be expelled.

In Nega Ben's timeline, the Galvan were wiped out by a rogue Celestialsapien that had been coerced by Maltruant at some point after the creation of their universe's Omnitrix.[1] 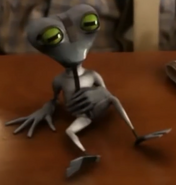 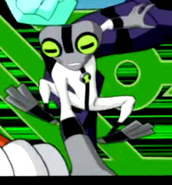 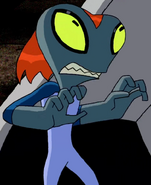 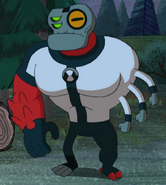 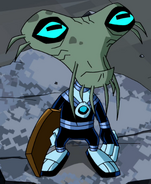 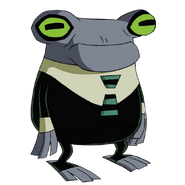 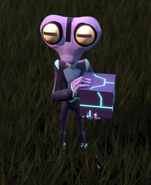 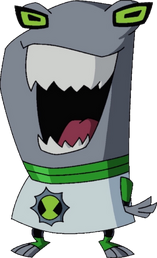 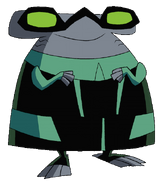