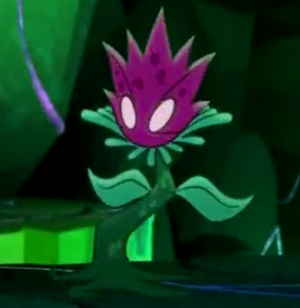 The Galax is a plant species formerly native to the rock planet Parvus.

A flower type plant with a purple bulb that possess expressions. The Galax was formerly a subterranean plant however due to the dangerous earthquakes, the plant was rendered nearly extinct leaving only one specimen left. The Rescuebots later retrieved that plant to preserve it placing it a terranium.

Retrieved from "https://aliens.fandom.com/wiki/Galax?oldid=142891"
Community content is available under CC-BY-SA unless otherwise noted.