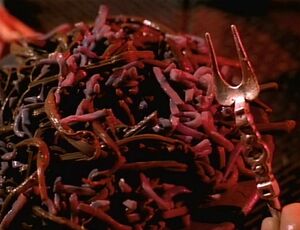 Gagh, usually referred to as Serpent Worms when not in cuisine, are small worm-like organisms native to planet Qo'noS and commonly eaten alive by Klingons.

There are at least 51 known varieties of this delicacy, some of which appear to be made from different worm species (Bithool Gagh have feet; Filden Gagh can squirm; Meshta Gagh can jump; Torgrud Gagh can wiggle) while others are simply used to refer to different forms of preparing (Wistan Gagh is packed in Targ blood). The term Racht is also commonly used and seems to describe a larger variety of Gagh.

Retrieved from "https://aliens.fandom.com/wiki/Gagh?oldid=180727"
Community content is available under CC-BY-SA unless otherwise noted.