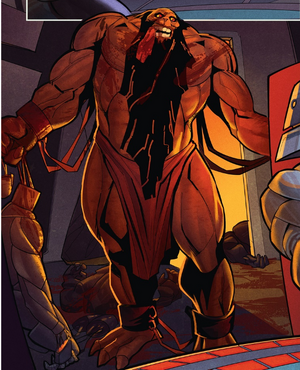 Meteora Universe
The Gabroids are a war-like species of aliens in the Meteora Comic Series.

The Gabroids are bulky red-skinned humanoids. They appear to possess different sexes like male and female. Their chests are mostly dominated by a mass of thick black facial hair.

Long ago the Gabroids were discovered by a advanced alien civilization. The alien taught primitive Gabroids all the secrets of the universe and allowed them access to advanced technologies. Rather than be grateful for to their benefactors, the Gabroid turned their new technologies against them. These aggressive savages now armed with advanced weaponry took to the stars and started a full invasion of the neighboring planets.

The Gabroids expansion was stopped at the Battle of Karkut, were a large number of the Gabroids were massacred ending their reign of terror. However a few Gabroids managed to escape biding their time, attacking quiet peaceful worlds.

The experience with the Gabroids had a huge effect of the psyche of galactic civilization. It was decided by the Union of Justice and Order, that no underdeveloped planet would be allowed to enter the intergalactic community unless the planet developed advanced technology or method to reach other inhabitable worlds, leading to the creation of the Space Code.

The Gabroids are a war-mongering culture, taking pleasure in plundering, killing, raping other worlds and sentients.

Retrieved from "https://aliens.fandom.com/wiki/Gabroid?oldid=172943"
Community content is available under CC-BY-SA unless otherwise noted.