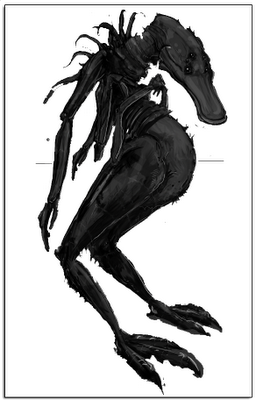 If nonsapient, territorial and violent. If sapient, humanlike and reserved.

The Gabbleduck is a large, four-armed creature named for its duck-like beak containing "holly-leaf-shaped" teeth, while official illustration shows it to resemble a caiman. The Gabbleducks are derived from the Atheter, an ancient civilization that devolved voluntarily to escape the influence of mutadaptogenic Jain technology and left instructions to return them to limited sapience in the infostorage hotworld the Golem Mk. 35 "Cento" investigated in Brass Man. In The Line of Polity, Gabbleducks are a constant hazard for any on the former Theocracy farm-world Masada, due to their being not particularly resilient but capable of being deceptively stealthy for their 3-5 meter bulk and capable of achieving speeds rivaling that of a small bus.

Retrieved from "https://aliens.fandom.com/wiki/Gabbleduck?oldid=131905"
Community content is available under CC-BY-SA unless otherwise noted.