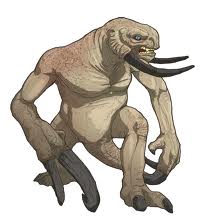 Gúta (pronounced "Gueta") are a non-sapient extraterrestrial species that was indigenous to the planet Reach, where they were the largest terrestrial species found on-world. They were bipedal, standing roughly 20 or 30 feet tall and while aggression was rare, rutting males would attack if interrupted. They were presumably far too large and violent to serve any exportation purpose, and therefore they were very likely rendered extinct when Reach was glassed by the Covenant in 2552.

Retrieved from "https://aliens.fandom.com/wiki/G%C3%BAta?oldid=112848"
Community content is available under CC-BY-SA unless otherwise noted.