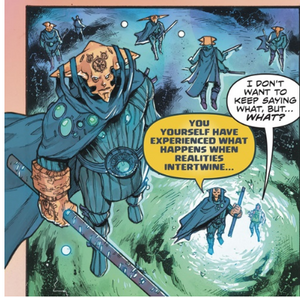 The Fuginauts are a extra-dimensional race of cosmic entities that exist in the DC Comics.

The Fuginauts are large humanoids, though a few sport some differences like extra pairs of arms. They are cosmic entities, that hold power over time and space.

According to one representative Tempus Fuginaut, the Fuginauts are contemporaries of the Monitors, an equally powerful race that watched and observed the Multiverse. However the Fuginauts are beings that preserve realities and ensure that they do not interfere with one another.

Retrieved from "https://aliens.fandom.com/wiki/Fuginaut?oldid=137782"
Community content is available under CC-BY-SA unless otherwise noted.