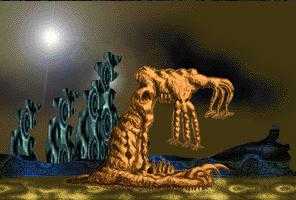 The Frutmaka evolved near a black hole—their beloved god Graveesha — on the same planet that gave birth to the Swaparamans. Long ago they drove the Swaparamans from their mutual home world—they saw the Swaparamans as a threat to their beliefs and their way of life.

The Frutmaka move with glacial slowness. They are near-sessile fungal animals that obtained high intelligence early in their evolution. Their frustration at being fully aware and helpless while they were eaten alive by predators gave way to the development of a latent telekinetic ability. No one knows when it was that a Frutmaka first lashed out with its mind at its tormentors, but modern Frutmaka have a formidable ability to teleport objects with the force of their wills.

They are able to combine their ability, and when massed together they can teleport large objects across huge distances. The Frutmaka believe that Graveesha gave them the power to teleport objects for the purpose of making sacrifices. They will occasionally teleport enemies to Graveesha to maintain harmony with their god. It is not known precisely what happens to the victims of Graveesha.

Teleporters: The Frutmaka are able to repel. You can warp alien ships out of your colonies' stars.

Retrieved from "https://aliens.fandom.com/wiki/Frutmaka?oldid=173822"
Community content is available under CC-BY-SA unless otherwise noted.