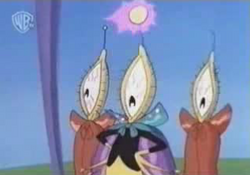 Pinky and the Brain

The Frunobulaxians are a sapient, spacefaring alien race from the planet Frunobulax. This species is known to travel in flying saucers.

They are green-skinned, Human-sized creatures with seemingly fragile built, a single eye dominating their faces and a short antennae atop their heads. Their fingers are long and thin. They can generate glowing magenta-colored light from the antenna and have telekinetic abilities.

In the year of 1995, two laboratory mice engaged in attempts at world domination, namely Pinky and the Brain, intercepted a space probe containing information about the Earth and placed their own images there instead of Humans, so that alien civilizations would believe the mice to be the actual rulers of Earth.

The plan seemed to be working, as the Frunobulaxians found the probe and landed in Washington to take Pinky and the Brain to Frunobulax. Once they arrived there, however, the mice were put in a laboratory, as the aliens wanted to study them, pretty much like the Earth scientists did. The episode ends with a variation of the series' most famous dialogue:

Pinky: "Gee, brain, what are we going to do tonight?"
Brain: "The same thing we do every night, Pinky - try to take over Frunobulax!"

Retrieved from "https://aliens.fandom.com/wiki/Frunobulaxian?oldid=182690"
Community content is available under CC-BY-SA unless otherwise noted.