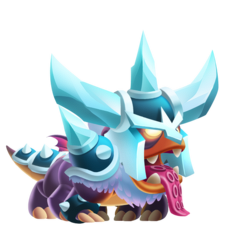 They appear to be a subspecies of the Alien Pet Dragon with a suit of armor made of ice.