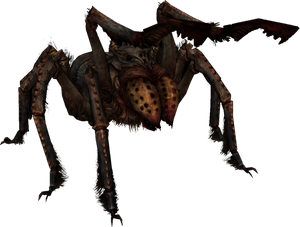 The Elder Scrolls
Frostbite Spiders are giant, aggressive arachnids found in Skyrim. The Spiders are highly aggressive and territorial, and will attempt to kill most creatures they encounter in their territory. They are found mostly in caves or other underground area, but can be found in the wilderness as well.

The Spiders can range in size, some being the size of dogs, the larges can be twice the size of Men.

Retrieved from "https://aliens.fandom.com/wiki/Frostbite_Spider?oldid=181088"
Community content is available under CC-BY-SA unless otherwise noted.