Akira Toriyama
Frost demons are a rarely-seen race of humanoid amphibian-like beings. They are unique in that they have partial carapaces that serve as armor.

A frost demon known as Frieza has ruled a galactic empire for an unknown, yet the grandiose amount of time.

Sometime in the past, Planet Vegeta was visited by King Cold and his son, Frieza, to announce his coronation and demonstrate a new technology known as the Scouters, which would serve as portable, head-mounted computers that could process power levels and command remotely connected ships. Sometime in the future, Frieza learned of the Super Saiyan legend. Fearing the possibility of his power structure being destroyed by a super Saiyan, Frieza gathered most of the Saiyans onto their home planet and created a death ball, which would penetrate the planet and destroy it, leaving only a few survivors, including one that would fight him and leave him gravely injured.

Eventually, on planet Namek, that one Saiyan was revealed to be non-other than Son Goku, who had fought many opponents. Frieza tortured and killed Vegeta, former prince of the Saiyans, who warned of the legend of the Super Saiyan. Frieza decided he wanted to see the alleged super Saiyan, and fought Goku, attempting to see if he really would become super. Eventually, Goku and his comrades formulate a plan, planning to make a spirit bomb that would kill the tyrant. Despite the tremendous energy gathered, Frieza survived the blast and killed Krillin, one of Goku's dearest friends. This finally triggered the transformation, and Frieza was eventually bested. Ironically, it was his own replication of the Destructo Disk that gravely injured him, bisecting him laterally and leaving him to bleed out on the ground. Goku mercifully gave him some life energy, but Frieza decided he should attack the Saiyan, who retaliated and seemingly killed him before Namek finally exploded.

However, Frieza demonstrated the great durability his kind possesses, still able to speak despite having his head split open and his body greatly maimed. He was later augmented with cybernetic limbs, only to be killed by a half-saiyan named Trunks. A creature named Cell, who contained DNA from many warriors, including Frieza's, became the new threat of Earth, eventually being killed by a child named Gohan.

A few years later, the crumbling Frieza Force revived him with the Dragon Balls, leaving him in pieces that attempted to reform. After being placed in a healing tank, he emerged back into his first form. He would then train for a few months, achieving a golden form that he would use to have revenge. However, he died again, only being taken from the afterlife to compete in the multiversal Tournament of Power. Due to him contributing greatly to the competition, he was revived and trained himself further.

He would later attempt to use the dragon balls himself to make himself grow a few centimeters, but his plan was circumvented, leaving him to return back to his ship and retreat.

They have no defined sex, being an asexual species.

Frost demons are powerful creatures that appear to be of reptilian or amphibian origin. They have cartilaginous carapaces referred to as bio armor, which partially cover parts of their body, such as the torso, the shoulders, the forearms, and the shins. They are mostly humanoid in shape, bearing 2 arms and 2 legs. However, they also have a long, prehensile tail, which can be equipped with a bony tip in regressed or advanced transformations. They also have reptilian feet that have 3 digits, though Universe 6 members such as Frost do not appear to have them, being covered with what appears to be boots. One notable feature of the frost demons is that they have translucent, crystalline sections on their body, most notably in the form of a frontal carapace.

Frost demons have remarkable transformations that can drastically change their bodies, ranging from their size, armor shape, horns, and even their skull shapes. Most of the transformations are regressive in nature, Frieza and his father using them to conserve their overflowing energy. The regressive forms also appear to remove a layer of skin on the thighs and upper arms, showing lightly colored skin with ridgelines. However, Cooler has not needed to transform into regressive forms, as he was not a mutant, and instead has found an augmentative form that makes him more powerful.

The first form is relatively weak compared to the others, mainly serving as a way for the most powerful frost demons to conserve their power, yet still perform their routine duties and interact with life. Their size is the same as that of the base form. This form includes two straight horns jutting from the skull, although individuals such as Kuriza lack them.

This form is stronger than the first but is still relatively weaker compared to the other forms. What distinguishes this form is that it is easily the largest of the regressive forms, engorging muscle mass and overall size. The horns also grow greatly in size, bending upwards at 90 degrees. King Cold has only ever been seen in this form, wearing caped armor that fits the gigantic tyrant.

This form is the most bizarre, as it regresses from a humanoid physique to a more xenomorph-esque physique. This form greatly increases the user's power and speed and is smaller than the second, but still dwarfs the first and base forms. The form flattens the nose and greatly elongates the cranium. More horns are also grown, laterally lining the head.

This is the form all members of this race are born in. It is likely that most members of the race have no trouble maintaining their power in this form, as seen by Cooler, but mutants such as Frieza and King Cold have to regress into smaller forms in order to properly control their power. This form is for most, the strongest, and can even absorb energy and increase power, which is measured in percentages and engorges the muscle mass of the specimen.

A greatly rare realm of transformations, truly exceptional frost demons can access an additional form that increases power after vigorous training. 2 known fifth forms exist, one being Cooler's final form, and the other being Frieza's golden form.

Cooler's final form greatly increases his size and muscle mass in a similar manner to the second regressive form and turns his shoulder armor into hoop-like structures. His head also grows four struts and an organic mask that forms a visor for his eyes, which turn fully red.

Frieza's golden form turns his skin golden and greatly increases his power. Unlike Cooler, he does not drastically change in mass, only reducing some of the crystalline sectors on his body and removing his shoulder pads altogether.

Frieza and his father are the only ones to show tremendous strength by default, being mutants. Other frost demons, like Cooler, are average in strength compared to other races, though are able to gain the upper hand by unlocking augmentative transformations after enough training.

They are mostly shown to be greatly durable, as Frieza is seen muttering to himself after his fight with Goku on Namek, despite being horrifically maimed and in space. He is also seen attempting to reform himself after getting revived by Shenron in pieces, though it may be due to the way he was revived. Cooler was also apparently able to survive as a mere chunk of his face after being burned in the sun, fusing and overwriting the artificial intelligence of a mechanical creature known as the Big Gete Star. The only known exception is Chilled, who died after fighting Bardock, despite suffering no visible wounds.

Most frost demons are on par with other races in the Dragon Ball universe, capable of learning a multitude of martial arts and combat skills. However, mutants like Frieza and King Cold are born with excessive power, and the former also is a prodigy in fighting, never having trained seriously until after he was properly revived.

One skill they all have is the ability to launch gargantuan masses of ki energy with their index finger.

Their lifespan is known to be much longer than that of humans, as Frieza only aged from adolescence into adulthood over from his visit to Planet Vegeta and is at least 70 (generally assumed to be a few centuries old) by the time he arrives on Namek, meaning that King Cold is at the very least a few centuries old.

Frieza in the process of transforming into his third form 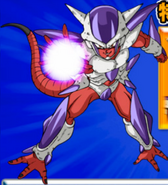 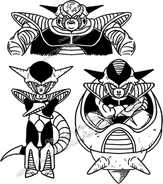 Cooler transforming into his fifth form

Jiora is a character from Cashman - Saving Soldier and is from planet Biretojin, many of Toriyama's works reference each other and sometimes take place in the same continuity (as Dragon Ball, Dr. Slump, and Nekomajin do). Jiora heavily resembles a member of Frieza's race and has the ability to take on other people's forms.

Jiora himself appears to be in the fourth form of Frieza's race if he is in fact one.