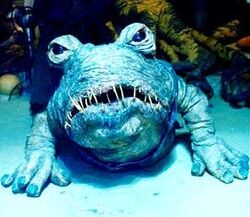 Star Wars
Frog-Dogs is a nickname given to a species of small sapient beings. Their homeworld is unknown, as is their true name.

Frog-Dogs are short creatures that walk on two hand-like paws, since they have no rear limbs, dragging their body like a seal. They have a large mouth with sharp, needle-like teeth. According to our sources, despite their name, they are actually reptiles.

To put it bluntly, they are essentially freeloaders, as they use their appearance of a seemingly dumb animal to their advantage. Letting sapient creatures keep them as "pets", in order to exploit their owners providing food and shelter.