Alien Species
Register
Don't have an account?
Sign In
Advertisement
in: Sapient Species, Descendants of Man, Dune Universe,
and 4 more 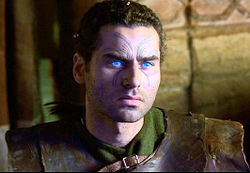 The Fremen are the descendants of the first colonists of Arrakis. They harvest Sandworms for a drug that they produce when drowned which gives limited precognitive abilities. They are notable for their blue within blue eyes.

Their religion appears to be a hodge-podge of modern religions. They perform rain dances; however, they know how futile such endeavors are on a desert planet. Their epitome of evil is the Christian devil. They also appear to idolize the Bene Gesserit.

A Fremen funeral consists of the usual casket viewing, eulogy, and last respects. However, the body is drained of its fluids which are then processed into water. If the departed was defeated in a duel, the victor is awarded water counters, and the deceased's property.