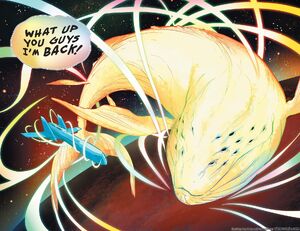 The Fractallians are a species of eighth dimensional parasites in Joyride.

The Fractallians a gigantic space whale creatures, with multiple eyes. They glow with a golden multi-color aura. They are capable of manipulating reality, shapeshifting, and ducking in and out of third space, seemingly vanishing.

Due to their reality bending abilities they can grant wishing, being akin to space genies. However they seem to be unable to manipulate transphasic metals.

Fractallian young take the form in the third dimension as a dazzling multi-color crystal which serves as an incubator. When hatched the resulting birth of this extradimensional being is know to cause severe mental trauma and psychotic episodes. Most species dub these Fractallian eggs enlightenment bombs. Due to the danger of Fractallian's to galactic society, the Regulators regard the Fractallian as a Class-A Hyper-Reality Incursion, and place laws to eliminate the creatures on sight, though many alien races covet their eggs as art pieces.

Retrieved from "https://aliens.fandom.com/wiki/Fractallian?oldid=173820"
Community content is available under CC-BY-SA unless otherwise noted.