Forest Banshees, known as Ikranay by the Na'vi, are draconic flying animals native to the moon of Pandora. 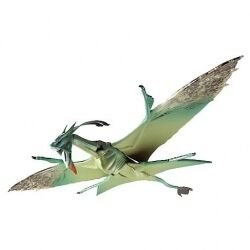 The Ikranay's natural habitat is the rainforest in both the upper and lower canopies as well as rookeries spread throughout cliffs and mesas of the mountainous regions of Pandora. The Forest Banshee has obsidian like teeth with a total of four wings and bones comprised of biologically produced carbon fiber composite much like its larger cousin, the Mountain Banshee. The Forest Banshee is an aerial carnivorous predator, usually feeding on smaller rainforest creatures such as the Stingbat and the Prolemuris.

Although smaller than the Mountain Banshee, the Forest Banshee is still a feared predator but it lacks the size required to support a Na'vi rider. Forest Banshees usually hunt alone, but can migrate in large flocks spread out in a wide, loose pattern (reasoning for this behaviour is not readily understood). Like a terran reef shark, the Forest Banshee may size up potential large prey, but seldom attacks anything close to its size, preferring smaller forest animals, it will make an exception however, in the case of self-defense or when it finds large prey in distress. Furthermore, Banshees will congregate to feed, and if necessary will fight one another for their portion of food. The creature shares the same basic anatomical advantages as the Mountain Banshee: strong carbon fiber bones; specialized flight muscles and a stiff torso to support its wings; they can make subtle adjustments to their flight attitude and speed with an articulated tail top which can flare or remain tucked to decrease aerodynamic resistance.