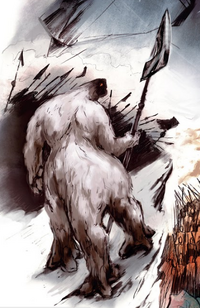 The Foon are shaggy haired quadrupeds with an upper torso, looking similar to Terran centaurs. They stand about a foot shorter than humans, but are one of the tallest species on their world. According to a human scientist, scans of the Foon cranial show self-inflicted damage which could explain their heightened aggression.

Generations ago the Foon were masters of a powerful empire. They subjugated the small Yultans and used their kind as slaves and livestock. Eventually the Yultan rebelled against their Foon masters, culminating into a species wide conflict.

Currently the Foon's empire is in decline, facing disastrous military campaigns and losing more territory to their former slaves. After the Tythyk warship Lightstorm fell from the sky, the Foon at the insistence of the scout Quando, to investigate the crash believing it to be Tiff's chariot. It was their belief that the goddess had come down to judge them.

The first action that the Foon warband took was hostility, believing the humans were sent by Tiff to test them. They sent themselves upon the aliens killing many, and though the human refugees were initially taken by surprise, their militia eventually overpowered the primitive aliens and captured the survivors.

Quando who had the wisdom not to partake in their senseless violence saw these strange creatures as a means to restore his people to their former glory. He peacefully surrendered and sought to learn from the humans so he may negotiate for their help and technology.

The Foon are around the level of Bronze Age, however they were the first race to discover steel on their world. They possess poor engineering skills, their cities are little more than furnished caves and piles of barricaded rocks.

A warrior race, the Foon believe themselves to be custodians of their world, a position granted to them by the goddess Tiff. They see it as their right to be superior to the Yultan and as wardens against the unnatural. They are carnivores and even eat the bodies of those they kill.

The Foon are a very obstinate race, relying heavily on tradition and abhorring change. Despite centuries of losses at the hands of Yultans due to their technologically superior weapons, the Foon elders refuse to equip their military forces with black powder weapons, not wishing to stoop to their enemies' evil ways, relying instead on antiquated weapons. Those that believe otherwise and call for moderation to the Foon way of life are exiled and considered heretics.

Retrieved from "https://aliens.fandom.com/wiki/Foon?oldid=175137"
Community content is available under CC-BY-SA unless otherwise noted.