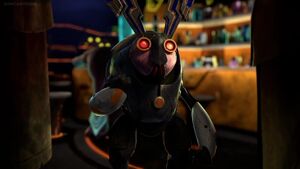 Foo-Foos are a race of humanoid aliens from an unknown planet.

Foo-Foos are beings of sizes around small to medium that somewhat resemble an Earth rabbit though, their true appearance is unknown.

They appear to wear high-tech armour covering their entire bodies. Apparently, each Foo-Foo is named after the species.

Retrieved from "https://aliens.fandom.com/wiki/Foo-Foo?oldid=183230"
Community content is available under CC-BY-SA unless otherwise noted.