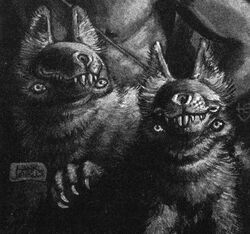 Larry Niven
The Folk are a sapient alien species of wolf-like predators.

The Folk are facultative bipeds (meaning that they alternate between bipedal and quadrupedal walking) which look vaguely wolf-like. They are dioecious creatures, like Humans, which means that individuals will be either male or female.

Their bodies are covered in slick black fur with curly white markings. Their forepaws have opposable fingers, allowing them to be used as hands, although they also tend to walk on quadrupedal stance a lot. Their most notable trait, perhaps, is that their eyes are located in the mandible, below the jawline rather than above it. Because of this, they have often been described as looking like "wolves with their heads upside down".

They are also noted as being extremely thin (weighing about a hundred pounds) and they only require eating every six days or so. On Earth they are known to purchase milk, water and bouillon, but nothing else for consumption. Instead, everything they eat is hunt down by them.

Their speech is extremely high-pitched, bordering on ultrasonic.

The life of the Folk is centered on the hunt. They hunt naked, without the aid of any weapons or other technology, and they always consume their meat fresh and raw. They are gregarious creatures which are invariably seen in small packs or four to six. When it comes to interspecies diplomacy, they generally prefer to associate themselves with other carnivores, such as the Gligstith(click)optok (although they also get along with the Chirpsithra).

Like many other species, the Folk first came to Earth as passengers aboard the Chirpsithra interstellar liners. A small number of them settled on an area of the Mojave Desert where they built their embassy. The surrounding area was xenoformed to act as their hunting ground, with the climate altered to resemble a temperate forest and populated with numerous species of alien fauna and flora.