"Well, flying saucer maybe, they were quite fashionable in the fifties. Just like bobby socks and hair cream."
―The Doctor, Dreamland.

Flying Saucers are a commonly used form of transportation by various intelligent species.

Although objects like these have been observed in the skies throughout all of human history, with well documented examples dating back to the medieval ages at least; the term has become extremely popular since the later half of the 20th century, and is often used interchangeably with U.F.O., both terms having become virtually synonymous with "alien spacecraft", although neither is supposed to mean specifically that. Curiously, the name "flying saucer" was first coined in 1947 to refer to a formation of nine unidentified flying objects (UFOs) observed by aviator Kenneth Arnold while in flight; even though the objects described by Arnold were actually shaped more like crescents.

The concept of saucer-shaped flying craft has also been researched by multiple agencies on Earth as well; and many people still hold the belief that at least some UFO sightings originate in man-made objects that have been kept secret from the public. Another relatively popular explanation (especially among cryptozoologists) consists in the idea that at least some of the observed "flying saucers" are actually living organisms native to the higher layers of the Earth atmosphere, and which seldom, if ever, touch the ground. This idea has been written upon in detail by Leonard Cramp, Trevor J. Constable, Ivan T. Sanderson and Karl Shuker, among many others.

A list of species known to utilize this type of vessel for interplanetary travel:

Other occurrences of flying saucers in fiction:

Examples of such creatures in science fiction include:

Mac, Palmer, and Norris discover the flying saucer which supposedly brought The Thing 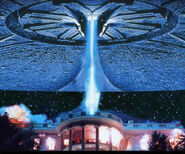 A flying saucer being used to destroy the White House.

Dalek saucers above the Earth 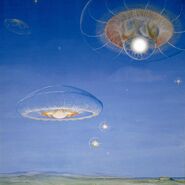 An artistic rendering of the biological saucers hypothesis, by Philippa Foster
Add a photo to this gallery
Retrieved from "https://aliens.fandom.com/wiki/Flying_Saucer?oldid=147199"
Community content is available under CC-BY-SA unless otherwise noted.