Alien Species
Register
Don't have an account?
Sign In
Advertisement
in: Flying Species, Descendants of Man, Non-Sapient Species,
and 6 more 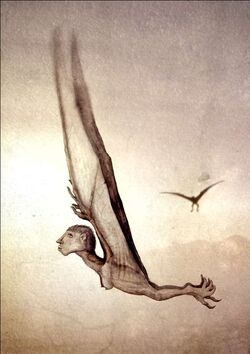 Nemo Ramjet
The Flyers were a posthuman species created by the Qu from a colony of the Star People. They were the most efficient of many flying human species existing accross many Qu-inhabited worlds. Flyers from another world included the ancestors of the Hand Flappers.

These flyers were less derived than other flying posthumans, resembling pterosaur-winged monkeys. Their advantage was a specially designed starshaped heart that funneled oxygen from the lungs to the bloodstream more efficiently.

The specialized heart not only allowed them to fill the skies of their world with dozens of species but also gave one of the species the ability to evolve a big brain without losing their ability to fly, evolving into the Pterosapiens. Other species of flyers eventually lost their flying ability, but managed to outcompete other animals due to their supercharged hearts and evolved ground-dwelling and swimming species of stupendous size and agility.