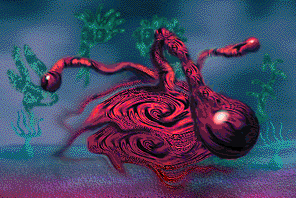 The Fludentri evolved on a world covered with ocean. They are composed of polymerized liquid. When a Fludentri is injured it regenerates in seconds, its fluid anatomy knitting together immediately after physical damage occurs. A Fludentri dies only when its entire body is disrupted at once.

The Fludentri are able to make their bodies assume varying degrees of solidity. They can wrap their tendrils quickly around prey and tighten them with ferocious strength. They see combat as a fine art, and a Fludentri is deeply moved by a finely-improvised combat performance between skilled and creative warriors.

They do not respect abstract thought or communication with concepts — they see these things as fuzzy-minded and irrelevant, and they prefer to let their bravery in action speak for them. A Fludentri's status and cultural power is determined by its skill in combat.

You are First Among Warriors. Your combat artistry is unmatched. None can best you in the grand arena and all Fludentri obey your command. Your people hunger to prove themselves against the dangers of new worlds, and they hunger for new dominions.
The leaders of the Armorers' Cabal await your guidance in their new task: to construct the mighty vessels that will allow the Fludentri to attain the stars.

Instant Healers: The Fludentri are resilient. You can repair all damage to your ships.

Retrieved from "https://aliens.fandom.com/wiki/Fludentri?oldid=64509"
Community content is available under CC-BY-SA unless otherwise noted.