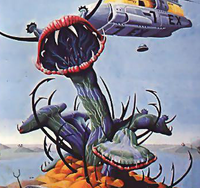 The Flower-Maw was a plant native to the world of Malvie.

A strange plant with a peduncle, which had a vague appearance of a giant pumpkin, that posed on a broad and short foot. It had thick gray-green bark that was streaked with regular ribs. An enormous pumpkin plant that moved, able to rock weakly on its base. The curious autonomous plant, evoked more marine flora than terrestrial. The Flower-Maw reveals it deadliness when it splits open, like an overripe seed exploding. When its ribs spread out, a enormous maw like an insanely sized orchid, crossed with the mouth of a shark appears while leaking reddish-brown juice that dripped like saliva.

The fleshy petals that make up the mouth are bristled with a multitude of carmine thorns, sharp and triangular, which suggested the idea of ​​teeth. It uses long crimson tentacles, also bristling with thorns to grab and drag unsuspecting prey.

Retrieved from "https://aliens.fandom.com/wiki/Flower-Maw?oldid=196065"
Community content is available under CC-BY-SA unless otherwise noted.