Ben 10
Florauna are a plant-based sapient species originating from the planet Flors Verdance.

Florauna are plant-based aliens with two, four, or five legs, four-fingered claws, Venus Flytrap-shaped flaps covering their heads and one eye on their heads. Some of them have secondary eyes of the same color on each of their shoulders.[1]

Female Florauna have bodies shaped like dresses, larger flytraps, bulb-like hair, and dark lips. They also lack the spikes that their male counterparts have on their arms, legs and chests.

Florauna native to Flors Verdance are colored green at a young age. Around their adult years, they start to turn brown just like Earth plants when they start to wither and die, or at least become very old.

According to Fistrick, Florauna from Flors Verdance eat through photosynthesis. Therefore, similar to normal Earth plants, they need a steady exposure to sun and water in order to thrive.[2]

Due to being sapient vegetation, Florauna possess all the adaptive abilities of the plant life they come into contact with. They can alter any part of their bodies, allowing them to stretch their limbs, grow spikes at will, and grow vines to trap other beings.

Florauna have a replenishing supply of seeds on their backs that can be used either as weapons, a means of quickly regenerating,[2] or to tame Gracklflints. Different seeds can be made into explosives, release knockout gas, or create smokescreens.

Florauna are quite strong, as they can lift and throw Ekoplektoids using their vines. They can also hold down Tetramands and Transylians with their bare hands.

Florauna possess enhanced durability, being able to crash against a wall without much damage. For Omni-Enhanced Florauna, their natural durability is increased thanks to their rock-like armor.

Florauna can merge with different forms of plant life such as Earth trees.

Florauna are immune to the effects of gases such as a flame retardant.

Florauna are incapable of being hypnotized by other beings; it is possible that they are immune to a Vladat's Corrupturas depending on the willpower of an individual.[3]

Florauna can grow vines, thorns, fruits, and flowers in many different bright colors and variations. These, however, depend on the conditions of their current environment.

Florauna can trap other beings by closing their flytraps.

Omni-Enhanced Florauna gain a pair of tentacle-like limbs that are electrically charged and far more durable than their ordinary vines.

Florauna and their vines are susceptible to getting themselves tangled or overstretched. Said vines are not indestructible, as they can be torn apart if they are pulled too much.

Despite their enhanced strength, Florauna cannot lift anything heavier than a barbell.

As they are plant-based aliens, Floraunas are particularly vulnerable to fire and ice-based attacks.[2]

Florauna can be thrown or lifted by a species with as much strength as a Chimera Sui Generis or a Transylian.

Despite their combat skills, Florauna can easily be defeated by a Revonnahgander with the same power level as Kundo.

Florauna are weak against electricity, such as an Amperi's attacks.

When they are denied their energy source, Florauna will quickly dry up, wilt, and perish.[2]

Most Florauna from Flors Verdance prefer to live peacefully and admire the beauty of their forest. Others would wake up deadly creatures to race each other to see who can avoid being eaten.

Whenever the Verda World Tree dies, its death affects all plant life on Flors Verdance. Therefore, Florauna would herd Mushroars so they can spread their pollen to save the World Tree and all plants.

Certain Florauna can act in a civilized manner and wear clothing. An example of this is Pax, an alien rights activist with non-violent tendencies. Though peaceful, he is very stubborn and acts recklessly.

The Florauna inhabiting Xenon live in large colonies and are very savage, as they lack any form of intelligence except their hunting instincts.[5] If any intruders are detected in their colony, they will not stop attacking them until they capture at least one as a sacrifice to the colony's chief.[6]

Florauna have a unique communication system that allows different members of the race to speak to each other. 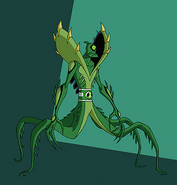 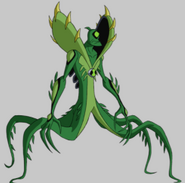 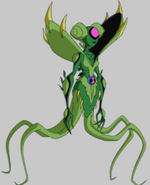 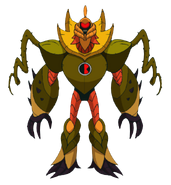 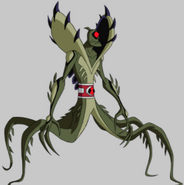 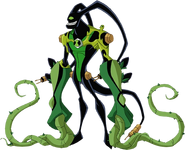