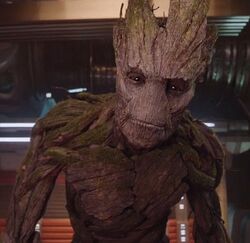 Groot (nicknamed based on their language)
Woodgod

Marvel Comics
Flora Colossi are a race of humanoid trees from Taluhnia, or "Planet X" as it's more commonly called.

Flora Colossi look like anthropomorphic trees. Their larynx are so stiff, that all they can say are "I" and "am" and "Groot", exclusively in that order,

Flora Colossi are extremely strong and durable. They possess chlorokinesis (the power to control plants). They can also change shape and stretch into inhuman shapes, lengths and sizes. When Flora Colossus get killed, a piece of their body can be planted and they are reborn. They are able to regenerate cut of parts of their body.