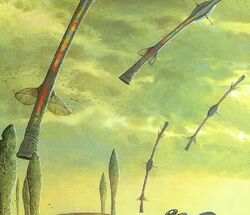 Flipsticks are tremendously tall, cylindrical creatures indigenous to the planet Darwin IV. Their signature locomotion involves leaping into the air through unknown means given their size, where they will flip 180° to land on their opposite end again. The 60 meter tall beings feed exclusively on Microflyers, which would be the only thing that could support such a massive organism besides the Amoebic Sea. They feed this way by jamming the microflyers' sonar with an oscillating tone, followed up with scooping them up in their feeding scoops.

Retrieved from "https://aliens.fandom.com/wiki/Flipstick?oldid=180081"
Community content is available under CC-BY-SA unless otherwise noted.