Alien Species
Register
Don't have an account?
Sign In
Advertisement
in: The Grim Adventures of Billy and Mandy Universe, Unnamed Species, Creatures of Unknown Sapience,
and 8 more 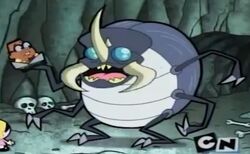 The Grim Adventures of Billy & Mandy
Flesh-Eating Beetles are a species of giant insectoid predators which can be found in pits on planet Mars. Despite their savage nature, they have demonstrated the capacity to speak simple sentences, suggesting that they could be at least semi-sapient.

Their natural diet seems to consist of Martian Zombies, although they will not hesitate to eat Humans who may find themselves in the Beetle's territory as well.