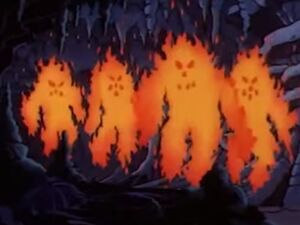 The Flame People are a subterranean race of fire-made elemental creatures originating from the core of the planet Sagar. They float above the ground and can throw balls of fire as means of attack. They fear water, which can destroy their bodies, and are enemies of the Amphimen. Despite their potentially-frightening appearance, they're not hostile to those who aren't aligned with the Amphimen.

Retrieved from "https://aliens.fandom.com/wiki/Flame_Person?oldid=186310"
Community content is available under CC-BY-SA unless otherwise noted.