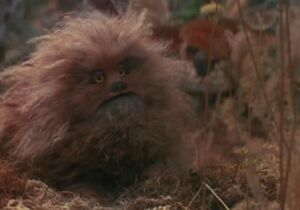 Brian Froud
Fizzgigs are a species of small, furry, non-sapient creatures indigenous to the forests of Thra. They're sometimes kept as pets by Gelflings.

Members of this species have the appearance of a small mammal, almost spherical in shape, and often exhibit behavior that is reminiscent of a dog's. Unlike a dog, however, their primary methods of locomotion are either bouncing or curling up and rolling. They are most certainly carnivores, as they have several sets of sharp teeth inside their mouths, similar to an Earth's shark. They can be fiercely protective and loyal to those they regard as friends.