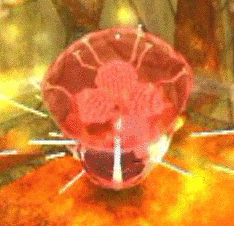 Bioenergy of most lifeforms

Metroid
The Fission Metroids are a form of metroid that have become severely exposed to phazon in Tallon IV's impact crater. When angered, they will undergo binary fission when shot.

Like all other Metroid forms, the Fission Metroids are energy-based lifeforms with transparent upper bodies. Also like other forms, they are energy vampires and thereby feed upon unseen energy from various other bioforms, and do so through the use of two sets of claw-like mandibles which protrude from the lower half of their body; these latch onto prey, perhaps even puncturing their skin and latching onto them from the inside.

When struck with any sort of weaponry, the Fission Metroids undergo binary fission as a defensive measure, endowing each new Metroid with invulnerability to most conventional weaponry. Unfortunately for them, this effect is unstable, and therefore during the split each Fission Metroid will become particularly vulnerable to a particular energy type, allowing someone with such weaponry to utilize this weakness against them. This vulnerability seems likely random due to the chaotic nature of Phazon mutation. The only two known ways to avoid a Fission Metroid's binary fission is to eradicate them with either power bombs or a Phazon Beam.

For some unknown reason, Fission Metroids do not seem to require going through the initial egg stage of Metroid life. Fission Metroids have been witnessed spawning directly out of pools of Phazon.

There are four subtypes of Fission Metroids, each being only weak to power bombs, phazon beams, and one other specific beam.