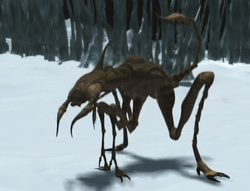 Firefries are a morphological caste of the Arachnid Empire and as such are indigenous to the planet Klendathu. They are hexapodal, parasitoidic Bugs that are birthed from other lifeforms infected with their spores. To get their spores into hosts they will implant them personally, which have an incubation period of unknown duration and with a possibility of mutagenic properties, allowing new subspecies such as the Zander Bugs. These spores hatch underneath the skin of the infected host and will leave said host en masse, which gives rise to baby firefries which are about the same general length as Earth's fireflies (which they are in fact named after), only to grow rapidly to the vastly larger adult "Infernofriers", which are approximately 8 feet tall. Unlike their namesakes, however, they not only generate light but heat as well, with the adults being actually capable of firing a stream of flame against targets.

As colonizing Bugs, they can survive in vacuums such as the vacuum of space for extended periods with little or no connection to an Arachnid hive.