Alien Species
Register
Don't have an account?
Sign In
Advertisement
in: All Tomorrows Universe, Bipedal Species, Humanoids,
and 7 more 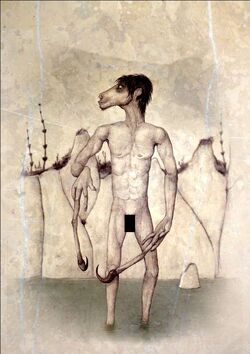 Evolved from feral humans created by the Qu

Evolved into the Sail People

Nemo Ramjet
The Finger Fishers were a posthuman species created by the Qu from a colony of the Star People. Their Star People ancestors lived on a planet mostly covered in oceans with small continents and thousands of archipelago's.

The Qu returned the Star People to a feral, non-sapient state. After the departure of the Qu, they evolved into a wide array of forms, one of them being the finger fishers.

These are coast-dwelling creatures who use their elongated middle-finger with its hooked claw to fish. Their mouths evolved into narrow snouts lined with needle-thin teeth to grab their slippery prey.

Eventually, they evolved into vastly different species including some fully aquatic ones, flying ones and the sapient Sail People.