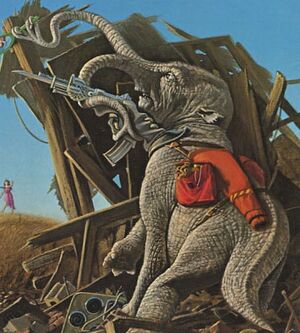 The Fithp (singular: Fi) are an elephantine alien species which traveled to our solar system from Alpha Centauri in a large spacecraft driven by a Bussard ramjet. The aliens are intent on taking over the Earth. They physically resemble man-sized, quadrupedal elephants with two trunks.

The Fithp possess more advanced technology than humans, but have developed none of it themselves. In the distant past on their planet, another species was dominant, with the Fithp existing as animals, perhaps even as pets. This predecessor species badly damaged the environment, rendering themselves and many other species extinct, but left behind their knowledge inscribed on large stone cubes (called Thuktunthp, plural of Thuktun in the Fithp language), from which the Fithp have gained their technology. The study of Thuktun is the only science the Fithp possess.

The Fithp are armed with a technology that is superior rather than incomprehensible: laser cannon, projectile rifles, controlled meteorite strikes to bombard surface targets, lightcraft surface-to-orbit shuttles the size of warships, etc.

The Fithp are herd creatures, and fight wars differently from humans. Throughout their history, when two herds met, they would fight until it was evident which one was dominant over the other; then fighting ceased and the losers were incorporated into the winning herd. The Fithp expect their contact with humans to proceed along these lines, and are confused by human attempts at peaceful contact.

Upon arrival on Earth, the Fithp immediately attack the Russian space station, where Russians and Americans wait to greet them. They proceed to destroy military sites and important infrastructure on Earth. A US Congressman and Russian cosmonauts are captured from the ruins of the space station.

Facing possible extinction due to the long-term effects of biological weapons, a group of high-ranking Fithp were selected by wager to escape to the stars. The Chtaptisk Fithp ('Traveling Herd') are divided between 'Sleepers' and 'Spaceborn', as the ship is both a generation ship and a sleeper ship. The original leaders of the herd are subordinate to their descendants the spaceborn, who are well prepared to start a space based civilization, but are still dedicated to the generations-old ideal of conquest.

After their initial assault, the Fithp land ground forces in the center of the North American continent, primarily in and around Kansas. They defeat efforts by a National Guard detachment (and, somewhat later, three American armored divisions) to dislodge them by using orbital lasers and barrages of kinetic energy weapons, but a combined Russian and American nuclear attack wipes out their beachhead. The Fithp, who are familiar with nuclear weapons but prefer to use cleaner ones, are shocked by what they consider the barbarity of humans' willingness to "foul their own garden" with radioactivity. Human protagonists, however, are exultant with victory.

It is during this initial invasion that more captives are taken. These also comprise a mixed bag of civilians including an elderly couple from the US Bible Belt as well as a young woman who was a high functioning mental patient at Menninger's. They are put to work by the Fithp on board their mothership, who expect them to integrate themselves into the herd. The humans decide to cooperate until a chance for some serious sabotage presents itself.

The Fithp respond to the defeat of their invasion by dropping a "dinosaur killer," a large asteroid whose impact results in environmental damage on a global scale, in particular the almost total destruction of India. In the aftermath, the aliens invade Africa, where they enjoy more success. One result is the end of South African Apartheid. Simply, Whites and Blacks become equal under the rule of the Fithp.

The United States secretly builds a large, heavily armed spacecraft propelled by nuclear bombs (a real concept commonly known as Project Orion). While an earlier implementation of the idea was ruled out due to environmental reasons and the danger of radioactive contamination, in the desperate situation facing humanity such considerations are cast aside. The ship is named after the Biblical Archangel Michael, who cast Lucifer out of Heaven.

The Michael launches and battles through small enemy "digit" ships in orbit. Though seriously damaged, she pursues the alien mothership. One of the space shuttles carried aboard Michael rams the Fithp ship, seriously damaging it, and slowing it down enough for the Michael to catch and attack it, dealing additional damage.

On Earth, American President David Coffey receives an offer of conditional surrender from the Fithp. Coffey leans towards accepting the offer; he is willing to let the Fithp withdraw into space, and is reluctant to destroy their sophisticated technology and cargo of females and children. He is opposed by his advisors, who feel that by allowing the Fithp to escape and regroup, he risks the whole of humanity; pressing the attack risks its foes. When Coffey seemingly folds under the pressure of making a final decision, his hardliner National Security Adviser, Admiral Carrell effectively stages a bloodless coup d'etat, circumventing the President and communicating the rejection of the aliens' terms. A final act of sabotage by escaped humans aboard the alien vessel forces the Fithp to accept humanity as the stronger species and surrender themselves to become part of the human "herd".

Retrieved from "https://aliens.fandom.com/wiki/Fi?oldid=178219"
Community content is available under CC-BY-SA unless otherwise noted.