"The dawn of time. The beginning of all beginnings. Two forces only, good and evil. Then chaos. Time is born, matter, space. The universe cries out like a newborn. The forces shatter as the universe explodes outwards. Only echoes remain, and yet somehow, somehow the evil force survives. An intelligence. Pure evil!"
―The Doctor explaining Fenric's origins and nature. 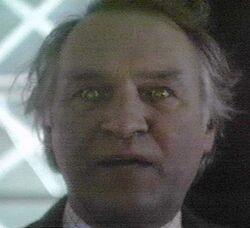 At the creation of the universe

Doctor Who
Fenric is a name given to an evil primordial entity: a living disembodied intelligence born at the dawn of time, before the universe's creation, and which can manifest himself by taking over the body of a living host. He was imprisoned by the Doctor for seventeen centuries in the Shadow Dimensions, before escaping in the year 1943. His followers are referred to as "the Wolves of Fenric".

According to the Doctor, however, "Fenric" is "just [Commander] Millington's name for it" and the entity truly has no name, although he seems to have been called Fenric by the Vikings who originally stole the flask in which he was imprisoned.

Even while imprisoned, Fenric has the power to create time storms that can transport individuals throughout time and space, and to give instructions to his followers.

In the third century AD, Fenric was defeated in a game of chess by the Doctor, who imprisoned Fenric inside a flask that would later fall into the hands of a merchant from Constantinople. Despite being imprisoned, Fenric could still exert enough power to transport the last of the Haemovores (a race of vampiric humanoids from the distant future) to 9th century Transylvania.

Fenric made the Haemovore his servant and ordered him to recover the flask, but even though the Haemovore followed the merchant throughout Europe, the flask was eventually stolen by Vikings, who became aware of the evil imprisoned into it and buried it in the coast of Britain, using runes to warn off others about it. It was only in 1943 that Dr. Judson used his ULTIMA machine to translate the runes and allowed Fenric to be released.

Fenric took over Judson's body and planned to take revenge upon the Doctor in a chess rematch. Meanwhile, he commanded his Haemovore followers to use the deadly chemical that was being developed as a weapon in the naval base Judson worked for, and release it in the oceans to poison the Earth, thus creating the very same future that would cause all of mankind to evolve into the Haemovores in the first place.

This future was averted, however, as the Doctor managed to convince the Haemovore leader that Fenric was manipulating him, and turned him against his master. The Haemovore used the deadly gas to destroy himself along with Captain Sorin, whose body was being inhabited by Fenric, defeating the entity once again.

Retrieved from "https://aliens.fandom.com/wiki/Fenric?oldid=187550"
Community content is available under CC-BY-SA unless otherwise noted.