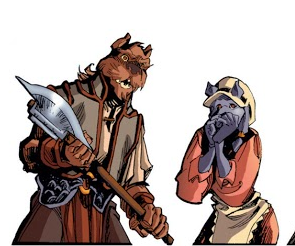 The Feng are a sentient race that inhabit the planet Ythaq.

The Feng are bipedal felines. Their fur color come in a multitude of colors.

The Feng are one of many races descended from sentients that were stranded on the mysterious planet Ythaq.

For three centuries the Feng collected stories and tales throughout the ages of the accounts of castaways that crashed on Ythaq. Over time the Feng's collected a vast archive on Ythaq history, however they soon began to see an uncanny pattern of the ships that crashed on the planet. In addition they saw a correlation between the crash landings and the appearances of the those that could use the Telluric Nodes.

Tao, an investigator of the Feng, was sent out to discover the mystery of Ythaq where he encountered survivors from the Twin’s Comet. Through Tao the survivors were able to gain assistance from the Feng who provided them with supplies and temporary bases of operations in order to discover the secrets of the crashes and the mysterious Game.

The Feng are a truly special people. Knowledge is the only pursuit these peaceful beings follow. They travel the world, darkening thousands of pages with their notes and observations.

They are known to possess lodges and outposts all across Ythaq for the sole sake of collecting information. These lodges are always open to those that seek wisdom to travelers and scholars alike. To the Feng knowledge is a treasure and it is their duty to preserve and chronicle. Due to their nature most races on Ythaq don’t harass them and are just seen as wandering nomads. However contrary to common belief, Feng possess hidden cities which are actually vast libraries where they store their repository of books and scrolls collected throughout the ages.

Retrieved from "https://aliens.fandom.com/wiki/Feng?oldid=168759"
Community content is available under CC-BY-SA unless otherwise noted.