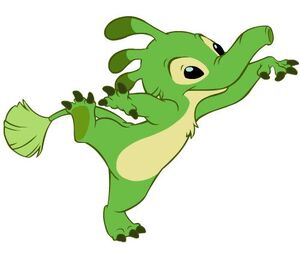 Experiment 010, first nicknamed Felix, and more recently Oscar, is one of the hundreds of creatures genetically engineered by the Kweltikwan mad scientist Dr. Jumba Jookiba.

This experiment, number 10, is a cleaner... only at an extreme level. It even considers living beings as dirt, dust and filth, and attempts to kill it as well. It is changed later, but gets reprogrammed a little bit too much: he becomes a dirtmaker instead.

Felix is a bipedal mammalianoid being with green fur and a long tail which ends in a brush-like structure, used for cleaning dust. It has four fingers on each hand and three toes on each foot, all ending in black-colored claws. Its head is large with a long tubular snout which is used as a vacuum cleaner. It can also shoot lasers out of its snout, which are used to disintegrate germs and small creatures. Its eyes are large and black in color and it has three short appendages arranged in a crest-like structure on the back of its head.

Experiment 010 was one of Dr. Jookiba's first creations. The creature was "programmed" to be a perfect cleaner whose main function was to help maintaining the laboratory clean and free of germs. However, 010 had a terrible error in its "programming" which caused it to mistakenly identify lifeforms as germs and try to exterminate them. Like all of Jumba's experiments, 010 ended up on Earth where it was given the nickname Felix (after Felix Ungar). Jumba managed to fix the error, avoiding a major disaster, but also turning Felix into a troublesome dirt-maker, after which it was renamed Oscar (after Oscar Madison and possibly Oscar the Grouch). It was later given away to Captain Gantu.

Retrieved from "https://aliens.fandom.com/wiki/Felix_(Lilo_%26_Stitch)?oldid=179700"
Community content is available under CC-BY-SA unless otherwise noted.