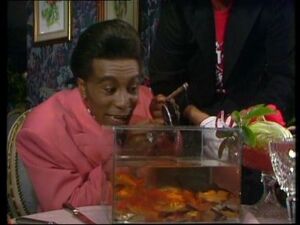 Felis sapiens are a humanoid life form who evolved from a small population of cats within the Jupiter Mining Corporation ship Red Dwarf over three millions years and originated from a pregnant cat, called Frankenstein, which had been, against ship regulations, brought on board.

This species began to worship the owner of Frankenstein, Lister, as their god, Cloister. They developed a religion surrounding the events of Cloister's life before he was 'frozen in time' for 3 million years. An example of this was that Lister had had a plan to start a doughnut place on Fiji became their vision of Heaven, which they named Fushal, and also their belief that the document Cloister gave to Frankenstein (in fact his laundry list used to line its basket) was of some cryptic meaning.

Because of the details of Fushal, the Cats fought for thousands of years in the two faction of the ones who thought the Doughnut Diner hats should be red and the ones who thought they should be blue. The two factions each made a starship and they left Red Dwarf to try and find Fushal. The Blue faction, who were using the list as a star map, crashed into an Asteroid and the Reds flew on forever and were never seen again. only the sick and the lame were left which eventually died apart from one of their descendants, known as the Cat, which was left, probably the last of his species in the entire universe.

Felis sapiens is a terrestrial species of sapient humanoids. Cats resemble humans physically. However there are some differences. Cats have slimmer, flatter faces, a narrow nose, the ears are higher on the head and have two sharp canine teeth, resembling fangs. They have six nipples, and a heart beat which sounds "cooler" than a human heart beat. The male of the species have hooks on their penis, used to trap and impregnate the female of the species.

Cats have many common traits shared with their ancestors. However, since only one Cat is known in the series, it is unknown whether this is a true reflection of the species. They have a vast appetite for food, a desire for many naps during the day, to save energy for their main snooze. They are obsessed with their appearance, often commenting on how good they look, and love dressing in outrageous suits. The Cat owns several thousand suits. Cats are highly self obsessed and show little concern for others, however they are capable of forming friendships.

The Felis sapiens created an entire mythology which originated from Dave Lister, the owner of the cat they are descended from. They worship a deity known as "Cloister the Stupid" (Lister), and believe that he shall lead them to the promised land of Fushal (originating from Lister's plans to move to Fiji). There they would open a temple of food (Lister planned to open a hot dog stand). Apparently it was also believed that Lister's laundry list was a star chart that would them to Fushal (the group that tried to follow them crashed into an asteroid).

Despite evolving from a cat, Felis sapiens speak English. However, they have a very complex written language made up of scents. Letters are represented by specific smells, and to read one would run their nose along the page, and interpret the sentence based on the scent. They may have a spoken language.

At some point in an unidentified century, a man named Dave Lister was serving aboard the mining starship Red Dwarf. He was caught smuggling his pregnant cat aboard, and consequently sentenced to 18 months in stasis. Unfortunately, during that time, there was a radiation leak that resulted in the deaths of everyone on board save Lister and the cat, who was safely sealed in the cargo hold when she gave birth.

Somehow over time the species continued to reproduce and evolve. They developed a mythology centered around "Cloister the Stupid" (Lister), a civilization, and even their own style of writing based on different smells. It was believed that when a cat died, they would travel to a place called Fuchal (originating from Lister's plans to move to Fiji) where they would open a temple of food.

Only a handful of Felis sapiens remained behind, and gradually they all died out until only one was left, at which point Lister finally woke from suspended animation.

Retrieved from "https://aliens.fandom.com/wiki/Felis_sapiens?oldid=167592"
Community content is available under CC-BY-SA unless otherwise noted.