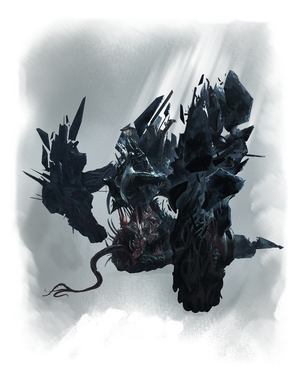 Fade to Silence
The Feeders are a mixture or organic and inorganic material manifesting into one being, and are one of the many eldritch monsters that appeared on Earth to destroy it.

The exact body is made up of two notable parts: the upper half of the creature is made up of rocky-material with a large pair of arms for slow locomotion along the ground. The lower half is made up of the organic material, and vaguely resembles a large sac with a circular mouth to consume prey.

While it moves very slowly compared to other creatures, it makes up for it with a very long and flexible tongue that can grab, and pull in prey close to be delivered a devastating blow.

Retrieved from "https://aliens.fandom.com/wiki/Feeder?oldid=187567"
Community content is available under CC-BY-SA unless otherwise noted.