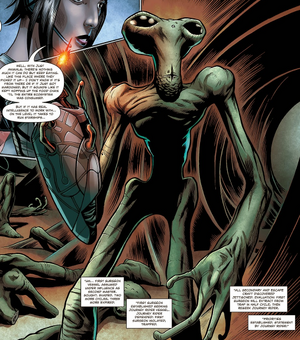 Avatar Press
Faunaculturalists are an advanced alien race of ecologists.

They are a tall humanoid race, with mottled brown skin. Their heads have lateral projections which give them a hammer-like shape. Similar to sharks, their bodies are made of cartilage.

The Faunaculturalists hail from a civilization that has spread to ninety-eight inhabitable planets. They are a race of intelligent beings composed of skilled ecologists, naturalists and researchers that explore the galaxy to study all types of lifeforms.

According to the body-snatcher, the Faunculturaists saw themselves as shepherds of life. They sought to improve life to the maximum, as shown by their curious need to study any new life-forms they came across. To them all life had a purpose. The crew of the Caliban believe that the Faunaculturalists were xeno-zoologists sent across the stars to collected new specimens to study. Though another argued that the wide-variety of specimens and recordings found, that the aliens collected on their ships could indicate they acted more like researchers looking for potential colonies to set up or improve ecosystems that were compatible for their livestock and chemistry.

A Faunaculturist research vessel had come across a peculiar planet whose biosphere was devoid of life. All life on the planet had been seemingly wiped out under unknown circumstances. The only clues left on that world were plains filled with skeletons. After collecting samples, the scientists left. Soon after they left the dead world, mysterious deaths began to plague the ship.

The deaths began with the four that had visited the strange death world. When the ship's Second Master began acting irrationally, ordering the ship to return to the homeworld against protocol, the crew quarantined him to determine his illness. They soon realized that the Second Shipmaster's mind was being inhabited by a second consciousness. The consciousness managed to escape from detainment latching onto another host and proceeded to massacre the crew.

The surviving crew learned that the alien entity was the reason for the death of its original world, seeking higher functional beings to progress itself. After being liberated from the planet, it wished to go to the Faunaculturalist homeworld and enslave its populace for its enjoyment.

Seeing that they could not effectively kill the creature as it would simply jump to another host, the survivors trapped the entity and decided to sacrifice themselves for the sake of the galaxy lest this creature be allowed to roam free.

They planned to overload the warp core of the vessel ensuring their destruction and the creature's, unfortunately their vessel was drained of power before the plan could be implemented. But to warn others of the threat they pre-recorded a message warning all vessels to stay away, and the remaining scientists committed suicide, willing to die rather than let the alien menace use their bodies as puppets.

Retrieved from "https://aliens.fandom.com/wiki/Faunaculturalist?oldid=161424"
Community content is available under CC-BY-SA unless otherwise noted.