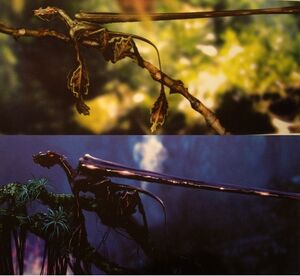 45 cm, roughly 1 meter across when unfurled

At first glance, this unique lizard appears to be little more than a dull, ruler-length reptile with few different features. When agitated, however, it unfurls like an antique Chinese fan and spins away to safety. In an instant, it morphs from dull to beautiful and then, just as rapidly, is once again a rather common-looking lizard-equivalent. 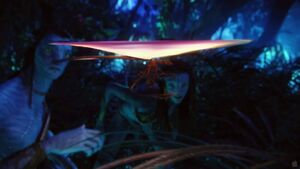 Understandably, the fan lizard is a favorite among the young Na'vi who will cherish this natural spectacle. At every opportunity, a Na'vi child will run through a field of ferns to disturb a group of resting Fan Lizards, and then marvel as the luminous magenta and purple discs float to the safety of a nearby branch. In the Pandoran twilight, this shimmering flight is strangely alien to the Na'vi.

An ancient dance (usually performed by the Na'vi children) celebrates the lizard. Two dancers stand side by side to create a rigid "spine." Another group of children run by and taunt the pair, at which point the entwined dancers "unfurl" into a circular shape and "float" in a zig-zag pattern through the other dancers. This is usually accomplished by hufwe, or wind instruments.

Fan lizards are known for the large retractable disk on their back. This disk has a structure similar to that of the Da Vinci "Aerial Screw" Helicopter. This magenta and purple membrane is bioluminescent and used for flight as well as to ward off any attackers with the brilliant light display and sudden increase in size. Note that when the Fan Lizard uses the appendage, the movement causes the body to spin with it.