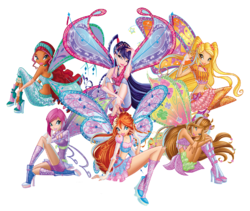 Many planets in the Magic Dimension

Iginio Straffi
Fairies are a species of magic hominids from the Magic Dimension.

Most of the time, they look they same as Humans, but in their "fairy form", they have a flashy outfit, and beautiful wings. They seem to be a mostly female species, as males are quite rare.

They are shown to be technologically advanced by human standards, possessing things like flying motorcycles and spaceships. They live on many planets in the Magic Dimension, each one ruled by a monarch.

Retrieved from "https://aliens.fandom.com/wiki/Fairy_(Winx_Club)?oldid=187294"
Community content is available under CC-BY-SA unless otherwise noted.