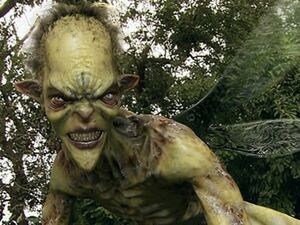 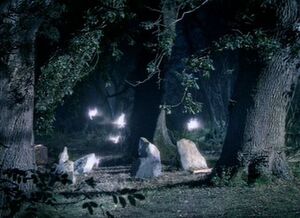 aggressive when provoked or their chosen one is threatened

weather manipulation, invisibility, drive their arms into the throats of their victims to kill them, (possibly) telekinetic, time manipulation

The Fairies are a race of humanoid like entities that are native to Earth and have inspired the myths and legends of fairies living within the forests.

The Fairies aren't particularly alien to Earth, but are considered more powerful and dangerous when compared to humans and possess powers capable of destroying the world. They have originated in an alternate reality called The Invisible or "Lost Lands" which is often described resembling an Earth forest. Ever since they crossed over to Earth, the Fairies have garnered a the reputation of being friendly creatures living a blissful life in the forests, while in actuality, the Fairies are territorial and aggressive, killing any one who provokes them, tries to reveal their existence, or threatens and mistreat the children who they've chosen to become fairies (Chosen Ones). Over the years they choose a new child to become a fairy and said children are protected by the fairies until the time they are ready to join them and live in The Invisible. When children who are harmed or die at the hands of other people before they become fairies, the people are killed by the fairies in a gruesome fashion either by driving their arms into the throats of their victims elbow-deep and leaving a windpipe full of rose petals or using the weather to freeze their victims to death. The Fairies also had various encounters with the immortal Captain Jack Harkness, such as in Lahore of 1909 where a group of fairies killed all of his comrades right in front of him because they were involved in the inexplicable and accidental killing a Chosen One. Jack later re-encountered the Fairies in Cardiff of 2007 as an agent of the Torchwood institute where they killed various people who had involvement with a young girl named Jasmine Pierce who was a Chosen One. During a confrontation with the Fairies, he tried to prevent the Fairies from taking Jasmine but realized that if he did, the Fairies would use their ability to control the weather to create massive natural disasters on Earth and kill all of human life if Jack doesn't let Jasmine become a Fairy and use their ability to journey back and forth through time to find more Chosen Ones. To prevent the end of humanity, Jack unfortunately gives in and lets the Fairies take Jasmine to The Invisible. This is the most recent recorded encounter of the Fairies.

While the Fairies are inherently powerful, their abilities can be somewhat vague when not explained by a character like Jack because the Fairies often use their powers off screen until the final confrontation in the episode. They have control over the weather and are able to us said ability to kill their victims, whether by freezing them to death via dropping the temperature and either intensely sleet, snow or rain cold water. It is said that their power over the weather is so powerful they ca create massive tsunamis, storms, hurricanes, and many other natural disasters and extreme weather conditions. They possibly have the ability to turn invisible based on how they often remain undetected even when near human activity or how they managed to stay undiscovered for years. It is believed that the Fairies have the ability to move forward and backward through time which they use to find Chosen Ones on Earth, this means that if they were to destroy all life on Earth, their search for Chosen Ones would not halt. They have the ability to transform into a form that resemble fairies of folklore. The purpose of the Fairies possessing this form is unknown. They possibly have telekinetic abilities, however as said before, the Fairies presented this ability off screen and isn't stated if the Fairies actually possess this specific power. Fairies and Chosen Ones are essentially immortal and it isn't clear if it is possible to kill Fairies by any known particular means.

Retrieved from "https://aliens.fandom.com/wiki/Fairy_(Torchwood)?oldid=183883"
Community content is available under CC-BY-SA unless otherwise noted.