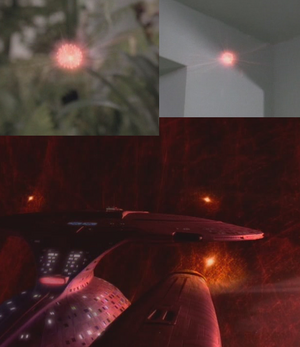 Star Trek
The FGC 47 Lifeforms are a species of sapient non-corporeal beings which inhabit the FGC 47, a nebula mostly composed of hydrogen, helium and trionium, located around a neutron star. These lifeforms feed on the plasma energy strands which are found forming a dense web within the nebula. Like many non-corporeal lifeforms, they are able to assume a faux humanoid form in order to communicate with solid creatures.

In 2368, the USS Enterprise-D entered the nebula, and the creatures found the ship's energy systems to be far purer than their natural food source, so they started draining energy from the ship, an act which could result in the ship's destruction. One of the FGC 47 Lifeforms manifested itself as a little girl's imaginary friend, presumably to gather information about the ship's crew and decide whether they represent any danger. Not at all used to Human cultural habits, the lifeform was surprised to learn about the many restrictions imposed by the adults on children. Upon learning that, it assumes that Humans are evil and allows their destruction, but changes its mind after Captain Jean-Luc Picard explains to it that such rules are made with the purpose of protecting children from harm. After this, the lifeforms retreat and allow the Enterprise to continue its way.

Retrieved from "https://aliens.fandom.com/wiki/FGC_47_Lifeform?oldid=180726"
Community content is available under CC-BY-SA unless otherwise noted.