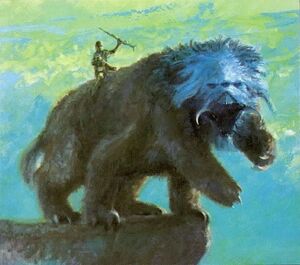 The War Against the Rull

The Ezwal are a sapient species inhabiting Carson's Planet.

They have six legs, blue fur and they look like wild animals. Ezwal are natural telepaths, but are able to communicate via telepathy even with non-telepathic species.

Culturally, they consider themselves non-conformists, even forgoing names, which, in their view, is unnecessary for a species that communicates via telepathy.

After contact with Humans, the Ezwal decided to pretend to be a non-sapient predatory species, for fear of extinction by humanity if they were found to be intelligent. During the Human-Rull war, two individuals were known to have co-operated with Humans.

Retrieved from "https://aliens.fandom.com/wiki/Ezwal?oldid=160671"
Community content is available under CC-BY-SA unless otherwise noted.