Alien Species
Register
Don't have an account?
Sign In
Advertisement
in: Articles that Need to be Rewritten, James Cameron's Avatar Universe, Featured Articles,
and 3 more

Pandora, or Eywa'eveng for the Na'vi, is a moon of the gas giant Polyphemus, (both are figures in Greek mythology) which orbits Alpha Centauri A and is rich in Unobtanium. 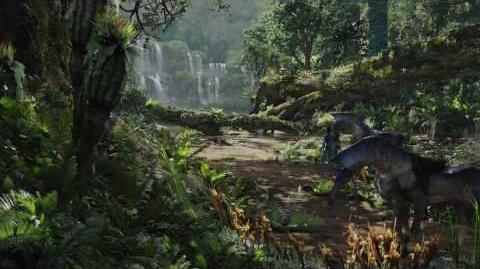 Discovered by the first interstellar expedition twenty-five years ago in 2129, Pandora has been the single most interesting thing to happen to the human race in hundreds of years. The news services love to run clips of the wild scenery on Pandora, and its bizarre flora and fauna.

To the cultures of Earth, which had lost all contact with the natural world, Pandora is mysterious, primal and terrifying. Pandora's atmosphere is a poisonous (to humans) brew of nitrogen, oxygen, carbon dioxide, xenon, ammonia, methane, and hydrogen cyanide. Even from orbit the scope of florae present on the surface indicates a planet brimming with life.

Other than the color, the trees resemble those of Earth. They have the familiar trunks and branches and leaves, though, due to the difference in planetary gravity, many of the shapes are strange and the proportions are greater due to the lower gravity. The trees and all plant life of Pandora have formed electro-chemical connections between the roots and effectively act as neurons, creating a planet-wide "brain" that has achieved sentience, which the Na'vi worship as a goddess. A few of the moon's flora even allow the Na'vi to access Eywa, and "upload", "download" and "access" the memories and even the consciousness of their deceased, and the moon itself.

Pandora, despite being almost the same size as Earth, is only a moon of the gas giant Polyphemus, which has thirteen other moons. However, due to its smaller size, its gravity is lower than Earth's. Depending on the position of the various moons, Pandora can have two or even three moons in its sky at once. Pandora and the other moons cast large black shadows on Polyphemus.

Pandora appears like a lush paradise by Earth standards during the day, though at night virtually all life on the planet exhibits bioluminescent qualities in various shades of blue (explaining the Na'vi's blue skin color, which is most likely a better camouflage at night on Pandora).

Pandora's atmosphere is poisonous to humans. A mix of nitrogen, oxygen, carbon dioxide (>18%), xenon (>5.5%), methane, and hydrogen sulfide (1%) and is about 20% denser than the atmosphere on Earth primarily due to the high percentage of Xenon; a heavy, colorless, odorless, and generally unreactive noble gas.

The increased air resistance within the twenty-percent denser atmosphere has a number of effects:

- Lower terminal velocity. combined with Pandora's twenty-percent lower gravity, a freely falling object's maximum speed is significantly less than on earth. A Na'vi who happens to fall from a Banshee (Ikran) has a good chance of surviving uninjured if they are over a forested area. Even over water, falling spread-eagled can reduce their speed sufficiently to allow an impact with the surface that will not knock them unconscious.

- The increased mass of the denser air means that more force is required to accelerate it as it is moved out of the path of a moving object. Humans on Pandora experience this when they try to run - it feels like there is a wind blowing against them, even though the air is still. They are further hampered by the fact that the reduced gravity causes their boots to slip more readily on paved or smooth surfaces, giving them less traction to force their bodies forward. The Na'vi compensate for this loss of frictional force by curling their large toes into the soft ground, and Pandoran six-legged animals use their many feet to gain a purchase on protruding rocks or small crevices.

- Flying animals can take advantage of both the lower gravity, which reduces the weight of their body, and the increased air density, which requires more force to displace with the downward/rearward stroke of their wings, and thus gives the animals body more impetus with each flap. The downside is that the denser air is harder to move through, and requires highly-efficient streamlining to achieve high flight speeds.

- Plants are subject to greater forces from the wind, since the greater air density means that the moving air carries more kinetic energy and more momentum, and the plants, leaves, stems, branches, and trunks must all have a greater strength and/or flexibility to resist it. 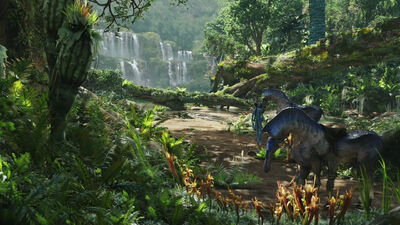 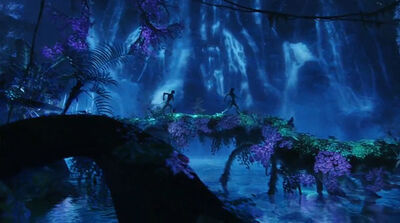 Pandora receives significant light from Alpha Centauri B (ACB). Because of this, for half the Polyphemian year its nights are never dark, but instead are more like Earthly dusk. At the closest point in its orbit, ACB is about 2,300 times as bright as Earth's full moon; at its farthest, it is still one hundred and seventy times as bright. During the other half of the year, when ACB is in the daytime sky, many Pandoran nights are illuminated both by Polyphemus's huge disk and reflected light from other nearby moons. Truly dark nights are uncommon. Polyphemus occasionally eclipses ACB at night for about one hundred minutes, but the light reflected by the planet still keeps the night from being dark.

When ACB shares the daytime sky with ACA, at its closest it adds about half a percent to the total illumination. When the 2 stars are close together in the sky, the effect of ACB's more orange light is unnoticeable, but as they separate over the years, an orange tint may be seen in areas shadowed from ACA's direct illumination. At its most distant, ACB is about 2,700 times dimmer than ACA and does not produce noticeable lighting effects. However, it still appears as a blindingly-bright tiny orange disk in the sky.

Because of its high axial tilt (29 degrees), Pandora exhibits considerable annual variation in the day-to-night ratio. In addition, its elliptical orbit produces seasonal temperature variations and a range in daytime illumination of about ten percent.

The terrain on Pandora differs somewhat from place to place. With each terrain region there is a different clan to go with it. The Humans have settled in the jungle region which is home to the Omaticaya Clan. There are different ecosystems with each region but some wild life are the same such as the Banshee. It also appears that floating land masses are not just isolated to the jungle region but are widespread as suggested in Avatar: The Game. The different terrains that are known are jungle, rainforest, subarctic, mountains, plains (savanna), and oceans. The jungle appears to be the largest region on Pandora.