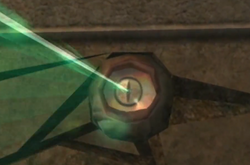 Eyons are sessile, energy-producing organisms found on many walls and ceilings throughout their homeworld of Tallon IV, although they are mainly confined to the local Chozo Ruins. They are essentially giant eyeballs, which seem to lack any coloration around the cornea while its retina is much smaller than a typical eye, presumably to properly focus the beam it produces. Eyons root themselves in place with a form of rooting system, allowing them to stay attached to walls and ceilings, although how they got their in the first place is unknown. If they are particularly long-lived organisms, it's possible that the Chozo themselves placed them in locations of value. If this is not the case, however, then how it gets to be where it is in the first place is a complete mystery. For that matter, how an Eyon gathers food and reproduces are a complete mystery, as well.

The origins of the Eyons is shrouded in mystery, but one can jump to the conclusion that they are in fact genetically engineered beings created as a first-line defense against intruders, as the Tallon Chozo had decided to step back from technology and begin living life integrated with nature.

With this hypothesis assumed true (as there is other evidence of the Chozo having done this on Tallon IV with other organisms), Eyons then produce a focused energy beam that cuts through whatever it touches, although Chozo Armor seems built to easily withstand it. While this beam seems to hinder movement, one must take into consideration the intense damage it would most likely do to an unarmored victim. Even so, Eyons are not capable of withstanding much in the way of damage, and if a weapon is fired anywhere near them - let alone at them - they will shut a membrane to protect themselves, which will ultimately disrupt the energy beam as well. It has been noted that charged beam technology will destroy them, indicating that they are not particularly well-armored.