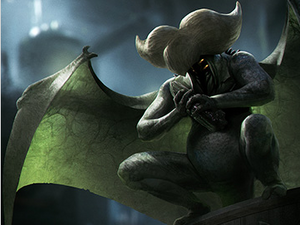 Endless Universe
The Eyder are a race of dragon-like aliens from Endless Space.

The Eyder resemble green bat-like gargoyles, though are small in stature. Their heads resemble a cross-between a curved triple horn and a stalk with four slit eyes.

The Eyder were originally the genetically-engineered pets of an advanced spacefaring race, possibly the Endless, however their creators died from a ravaging plague. They developed on their own and were enhanced by Dust. They multiplied and evolved into a society based on the ownership of Endless relics to which they claimed ownership.

A some point in time various groups of Eyders fought amongst themselves over the prestige of the Endless artifacts and dwellings, leading to an event called the Schisms, but the wound was healed thanks to a impressive orator named Scales Galena bring peace once again.

The Eyder took residence of the Endless orbital stations orbiting their gas giant world. Since then they have become an integral part of their culture with a near religious sense to them.

Retrieved from "https://aliens.fandom.com/wiki/Eyder?oldid=182755"
Community content is available under CC-BY-SA unless otherwise noted.