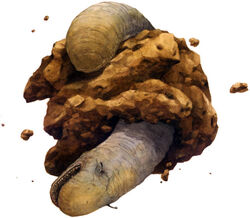 Star Wars
The Exogorth (a.k.a. Space Slug) is a colossal, non-sapient silicon-based lifeform that naturally inhabits asteroid fields in several planetary systems of the galaxy, being able to survive the space vacuum and freezing temperatures found in this unusual habitat.

Being silicon-based, rather than carbon-based, Exogorths have a very unusual metabolism, which enables them – and other, probably related, silicon creatures, like Mynocks – to survive unharmed in the vacuum of interplanetary space. Needing no air or water, they feed on the minerals of asteroids and also use stellar light to produce energy. They are also reported to eat Mynocks.

Size varies a lot in this species: while the average adult is 10 meters long, there are individuals that grow up to 900 meters. Oversized Exogorths can house an entire ecosystem inside themselves, where Mynocks and other creatures swallowed by the beast may become internal parasites and even create a breeding population of beings that spend their whole lives inside the cave-like esophagus of the Exogorth. In spite of their huge size, Exogorths normally reproduce by fission, not unlike Earth's planarians. They also need to molt periodically.

Because Exogorths live in asteroid fields, they are exposed to the danger of being hit by small asteroids. Besides being physically resistant, the beast has a highly sophisticated sense of spatial awareness, allowing it to calculate the speed and trajectory of all asteroids around, reducing the peril of collision.

Exogorths live in burrows they dig in asteroids and other small, atmosphere-less, celestial bodies. Tendril-like structures on their tail are used to anchor themselves to the rock and to absorb nutrients from it. They are not permanently attached to their asteroids, though, and they change their burrow from time to time. They do it by pushing off the asteroid and floating to another one. It could be said that they jump from one rock to another.

Virtually nothing is known about the origins of Exogorths, which are found all over the galaxy. We don't even know if they evolved on a planet or in the vacuum of space. The later alternative sounds a bit more likely, given how Exogorths are well adapted to their extreme environment. However, there is a theory that says that Exogorths are descended from some sort of organism native to the ancient planet Oblis, a world which later exploded and generated the Cularin Asteroid Belt, which is one of the areas where Exogorths are found. An interesting fact is that the Exogorths of the Cularin System belong to a different species which is relatively easier to tame.