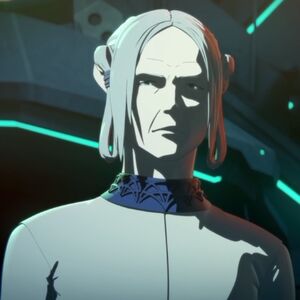 Godzilla
The Exif are a sapient race of deeply-religious humanoids whose homeworld was destroyed by King Ghidorah. After that, the few surviving members of the species became what they described as nomadic missionaries, and joined forces with other races whose worlds had been devastated, such as the Bilusaludo and Humans, aboard the spaceship Aratrum.

Members of this species appear Human, except for the shape of their ears. They notably have the ability to communicate by telepathy.

The Exif are a monotheistic civilization and claim that their belief in god is based on advanced science. Since their science calculates that the universe will have a definite end, and that all will die eventually, their faith dictates that life must have a purpose behind it.

Following their planet's destruction by Ghidorah, the surviving Exif became convinced that their fate had been the result of arrogance; that the draconic monster was in fact their god; and that the survivors had been spared in order to help Ghidorah to devour other planets, as that is the final purpose of all life.

The Exif believe that inhabited planets invariably go through a specific cycle in which humanoid intelligences emerge; invent technologies that lead to giant monsters (for instance, the nuclear tests that provoked Godzilla's rampages on Earth) and eventually result in an altered ecosystem; and this in turn is the fruit that Ghidorah will come to consume. This cycle is believed by them to be not only inevitable, but actually the ultimate purpose of the universe.

Retrieved from "https://aliens.fandom.com/wiki/Exif?oldid=173817"
Community content is available under CC-BY-SA unless otherwise noted.